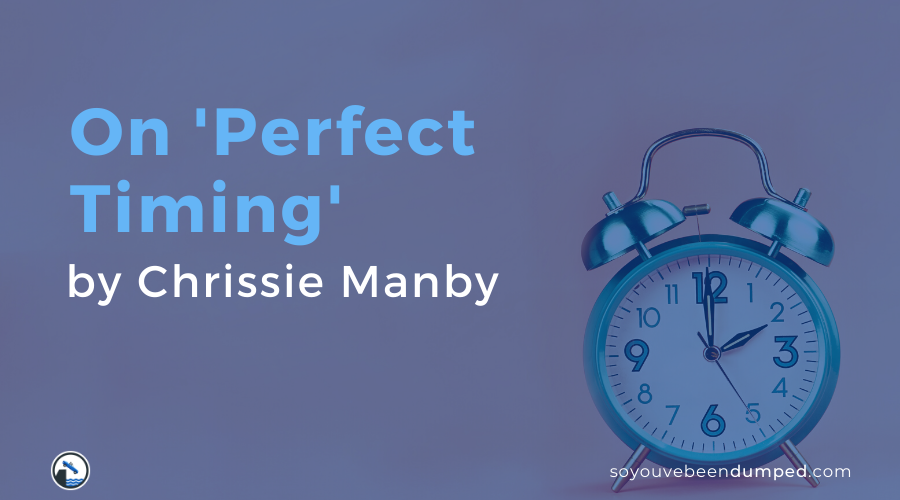 On Perfect Timing by Chrissie Manby

Comedy, they say, is all about timing. You want to hear a good one? How about the girl who got dumped seven days before she had to be her best friend’s bridesmaid? She lost fourteen pounds in a week and no longer fitted the disgusting dress she had to wear. She was so spaced out during the ceremony that she completely forgot what her duties were. And when the bride lobbed the bouquet in her direction at the end of the evening, she bungled her catch and ended up with a broken thumb. Funny, eh? Not at the time. (I was that girl).

Neither was it funny for my friend Ruby, whose new millennium started with a goodbye kiss. Or Lou, who went on holiday to celebrate her thirtieth birthday with her boyfriend and came back with a suntan and an ex.

There’s never a good time to be dumped. It goes without saying. But there are definitely bad times and for some reason, the men of my acquaintance seem preternaturally good at picking them. Why is that? And why don’t we see it coming?

Ruby, who was dumped on New Year’s Eve, recalls the Christmas card she got that year. In it, her soon to be ex-boyfriend had written, “Here’s to another wonderful year together!” for heaven’s sake.

My own ex had gone along with the pretence that he would be at that wedding right up until the final furlong. He talked about the clothes he planned to wear. He helped me buy the wedding present. His exit from my life was so sudden and unexpected, there was still a place setting with his name on it at the wedding reception.

Could You Not Have Waited a Week?

Months later, when the pain had subsided, I would still find myself asking why he hadn’t waited just a solitary week longer to drop the axe. But I think I’ve worked it out now. For any sensitive person, deciding when to end a relationship is as fraught as the realisation that you’ve fallen out of love itself.

Inevitably, like the day you first met, the day you leave will become one of those anniversary days. So you don’t want to taint your soon-to-be-ex-lover’s birthday, or Christmas, or New Year, or Easter, or the anniversary of the day they first learned to ride a bike with an unhappy memory. In the run-up to a dumping, the list of veto-ed days can become endless. You don’t want to humiliate them by dumping them before the office picnic that you’re supposed to attend as their date – that adds another month.

You don’t want to dump her just before their mother’s birthday party – that adds a week. And on and on ad nauseam.

Because, they don’t know that the relationship is on the way out, the dumpee-in-waiting will continue to make plans with you. They’ll continue to accept wedding invitations on your behalf. So, the pressure begins to build. Will you never be able to tell them? And everybody knows that a build-up of pressure can’t carry on indefinitely. Something has to give. Just as a champagne bottle shatters if you leave it in the ice-box too long, the dumper says “I don’t love you” at exactly the wrong moment because they’ve been left with no choice.

After months and months of waiting for the right moment, suddenly the idea of seeing your family at your thirtieth birthday party is finally too much. The answer to imperfect timing is simple. As soon as you think it’s going wrong, then have the guts to say it. Just open your mouth and let the pressure out. Hell, who knows, you may even be able to talk through the problems…

Chrissie Manby is the author of seventeen romantic comedy novels for Hodder and Stoughton’s Coronet imprint. She is also editor/contributor to the Girls’ Night In and Girls’ Night Out/Boy’s Night In anthologies, which have so far raised more than £600,000 for children’s charity War Child, and topped book charts all over the world. Chris grew up in Gloucester but now lives in London. She is working on her second screenplay.

Head over to amazon UK to see all Chrissie Manby books.

Share your story of how when and where your relationship ended.