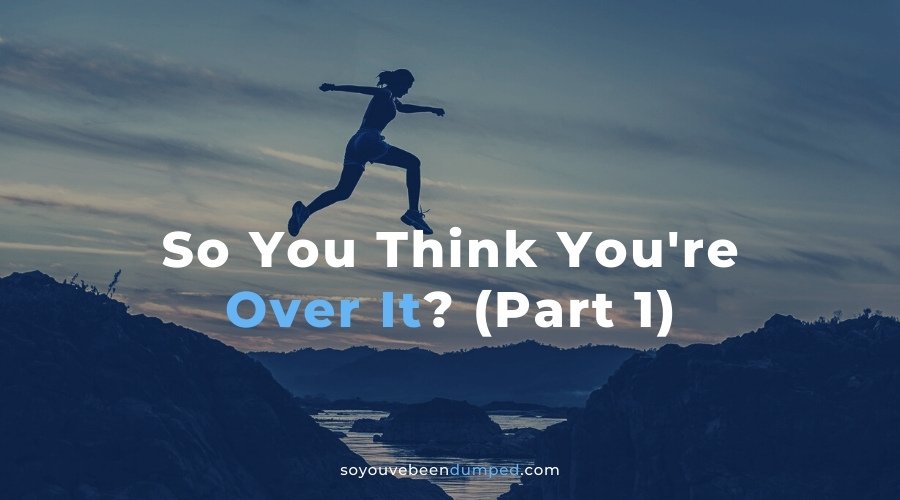 So You Think You’re Over It?

This is an updated archive post: ‘So You Think You’re Over It’ and because it is so long I’ve decided to cut it in half.

Do you think that you’ve made it successfully from “it’s over” to “I’m over it”? You might have, but many people mistakenly assume they are over it, only to experience some random emotional setback of some kind. Then, they realise that they aren’t quite as “over it” as they’d assumed.

One night, I was watching a repeat of Friends where Rachel runs interference between her sister and Ross, because she can’t handle the thought of them going on a date. When her sister is upset that Ross canceled, Rachel tells her sister the best way to get over a guy is to start dating a new one.

Boy, haven’t we all heard that before? It’s terrible advice.

Don’t Just Get Back on the Horse!

I rather suspect most people on the planet actually believe that advice to be right. If I had to pick just one gigantic myth about breakup recovery, then that whole “immediately get back in the saddle” chestnut would have to be it.

Hey there people, newsflash, just because you may be seeing someone new, and are even happy with your new person, it doesn’t mean you are over your ex.

In fact, I would estimate that as many as 90% of the people on soyouvebeendumped.com will and do rebound. By that I mean that they start to date someone new before they have fully processed the loss of their marriage or significant relationship, in a natural, wholly and completely way.

Rebounding can be a gray, hard-to-define area, and it is something we don’t always realise we are doing. In fact, I would go as far as to say most people even deny they are rebounding, and are tend to be most-insistent that they’re not!

I know, I’ve done it, and I bet you probably have too, at some point too.

As humans, we are all so very different and each of our relationships are unique. Some people experience cruel break-ups, whilst others have been let down gently.

Regardless of the way it was handled, the outcome was essentially the same – it was “over”.

When that happens, and despite what Hollywood shows us, every dumpee throughout the world has to endure a similar of healing process – which varies in length from person to person.

Because all breakups are different, what may be considered “over it” for one person, may not be exactly the same for another.

Why Do People Opt for Rebound Relationships?

One of the main reasons people rebound, is because dating is a distraction from the their own, often painful, healing process. In an effort to fast-forward through it, a dumpee hopes that the new person will help them “forget” the loss of the old person.

While it’s an understandable concept, it’s ill-advised. At the end of the day, that solution can be about as effective as putting a band-aid on a gaping bullet wound. Better to feel whole and healed before embarking on a new flight of fancy.

After years of perusing thousands of posts on our old forum, (not to mention surviving three break-ups in my own right), I have compiled some road signs which serve as universal indicators to your being whole again.

Use these following paragraphs (and the follow up post) in order to gauge how your progress is. This list is by no means exhaustive, and again, every item will not be relevant to every person who reads this. Take it all as general as possible, and if you realise that you’re not quite there yet, don’t punish yourself.

To quote the S.o.S. Band, Take your time, do it right.

Ok, let’s do this…in no particular order, here’s my list of ways to tell you’re over your ex.

First of all, one thing you will notice when you begin to feel over your ex is that you realise that you are no longer thinking of him or her all the time.

It feels good when you finally stop obsessing over “what could have been” and are no longer dwelling on what went wrong all the freakin’ time – doesn’t it?

And when you do find yourself thinking about your ex, and it doesn’t make you feel sad, angry, hurt, bitter, or nauseous (or any other intense emotion), then that is a very good sign as well.

If thoughts can come and go freely without bringing you down, and you are able to remember any “good times” without them eliciting a painful emotional response, then you are most certainly on the right track.

If you have stopped plotting ways to get back together, and have honestly stopped praying for reconciliation, then that’s a pretty good indication you’re over it.

Also if you once plotted ways to get back at him or her – but now stopped bothering – then you’re doing pretty good too.

The sooner you can stop the plotting of any kind, and start your plodding (down the road to recovery) the better.

Focus that energy you’ve been wasting on your ex and start shifting your focus to your own life, feelings, emotions, and so forth.

Time to be your own breakup coach!

3) Musical Freedom – Time to Play What You Want

When you hear music that reminds you of your ex, and you don’t become a complete emotional wreck, then you’re getting somewhere.

Being able to play music that once held meaning for you both can be a good sign that you are ever closer to that finishing line.

In fact, the music you find yourself constantly playing, in general, can indicate where you are at. For instance, if you’ve stopped playing the sappy and depressing love songs and started to put on empowering music like, say, “Survivor” by Destiny’s Child, then points for you.

4) Pictures No Longer Are Triggers

When you look at old photographs of the two of you together how do you feel? If you burst in to tears repeating “why why why?”, well then, you are probably not quite there yet. Keep trying, hon.

However if you can look at them and recall the happier times and don’t feel upset, then yay you!

As I say in the 10 Tips to Get Over It post, it’s probably best to box up the mementos and  store them until such time as you’re really over it.

Only then should you decide whether to keep them or torch them.

Ed note: Or you could even scan them and dump them. That’s what I’ve done.

Another good indication that you are over it, is if you no longer feel the need to compete with, or prove anything to, your ex (or your friends and family – or theirs!)

In the early stages of my breakups, I tended to fantasise about bumping into my ex whilst having some hot, new replacement on my arm.

If you have started to date someone new, and are constantly wishing you would bump into your ex to “show off”, then it sounds to me like you’re not really over it (and probably should not be dating someone new, at least seriously anyway).

Some people might even consider this using someone, but that’s a topic for another article…

When you really are over your ex, it is all about the new relationship and less about a competition with your ex and trying to PROVE you are over it. When it comes to being over an ex, the key is to actually become indifferent or ambivalent.

At the end of the day, recovery is not a race. For instance, just because your ex has got a new job, relationship, house or started a family and you haven’t, it is of no reflection on you, your desirability, your worth or your future.

It also doesn’t actually mean they are over year. Seriously. Don’t believe every thing you think.

6) Taking The High Road Not Revenge on Your Ex

If you heard that something fantastic happened to your ex, would you be pleased? Or at the very least, disinterested? Or would you spend hours dissecting how unfair the world is? Would your desire be to rant to everyone you know how there is no justice in the world? Or maybe you’d sit around fuming with envy over their good fortune?

If so, then you’re not there yet. Hang in there.

Someone who is truly “over it” would most certainly not celebrate misfortunes of someone who once meant so much to them.

Well, OK, not for long at any rate! (Maybe just a silent smirk for a moment or two…)

But if you find that you are dialing (texting for you younger types) everyone you know to dish the “good news” that your ex got dumped, fired, or some other tribulation, then chances are you’re not over it.

End of Part One – Summary

So how did you fair so far? Are you feeling more or less “over” your ex partner? I’d love to hear where you’re at in the comments below. Stay tuned for part two next week ok? Thanks for coming by and I wish you all the best on your healing processes.